The manufacturing process involves secretion of the enzyme Alteplase into the culture medium by an established mammalian cell line (Chinese hamster ovary cells) into which the cDNA for Alteplase has been genetically inserted.¶

Cathflo for injection is a sterile, white to pale yellow, lyophilized powder for intracatheter installation for restoration of function to central venous access devices following reconstitution with Sterile Water for Injection, USP.

Each vial of Cathflo Activase contains 2.2 mg of Alteplase (which includes a 10% overfill), 77 mg of L‑arginine, 0.2 mg of polysorbate 80, and phosphoric acid for pH adjustment. Each reconstituted vial will deliver 2 mg of Cathflo Activase, at a pH of approximately 7.3.

In patients with acute myocardial infarction administered 100 mg of Activase as an accelerated intravenous infusion over 90 minutes, plasma clearance occurred with an initial half‑life of less than 5 minutes and a terminal half‑life of 72 minutes. Clearance is mediated primarily by the liver.

Cathflo is indicated for the restoration of function to central venous access devices as assessed by the ability to withdraw blood.

Allergy such as Hives and breathing problems and swelling of your lips, face, and tongue.

Consult your physician or seek medical attention in an emergency situation If you are experiencing indications of bleeding, for example:

Make sure to contact your doctor at the earliest opportunity if you are suffering from:

Cathflo is for instillation into the dysfunctional catheter at a concentration of 1 mg/mL.

If catheter function is not restored at 120 minutes after 1 dose of Cathflo Activase, a second dose may be instilled (see INSTRUCTIONS FOR ADMINISTRATION). There is no efficacy or safety information on dosing in excess of 2 mg per dose for this indication. Studies have not been performed with administration of total doses greater than 4 mg (two 2‑mg doses).

No other medication should be added to solutions containing Cathflo Activase.

Instillation of Solution into the Catheter

Any unused solution should be discarded.

Store lyophilized Cathflo Activase at refrigerated temperature (2–8°C/36–46°F). Do not use beyond the expiration date on the vial. Protect the lyophilized material during extended storage from excessive exposure to light. 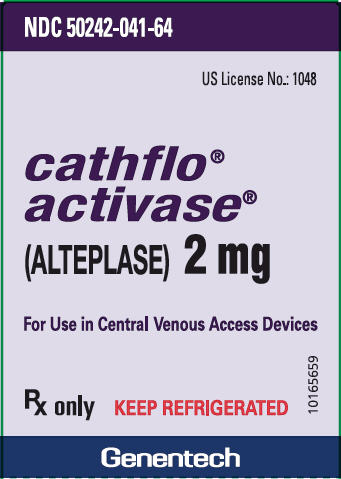