Medically reviewed by  A Ras MD.

What is Trelegy Ellipta?

TRELEGY ELLIPTA is an inhalation powder drug product for delivery of a combination of fluticasone furoate (an ICS), umeclidinium (an anticholinergic), and vilanterol (a LABA) to patients by oral inhalation. 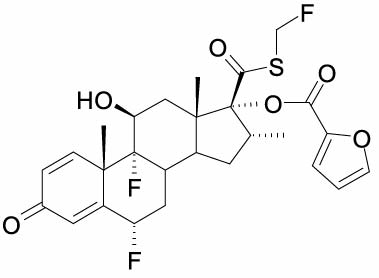 Fluticasone furoate is a white powder with a molecular weight of 538.6, and the empirical formula is C27H29F3O6S. It is practically insoluble in water.

Umeclidinium bromide has the chemical name 1-[2-(benzyloxy)ethyl]-4-(hydroxydiphenylmethyl)-1-azoniabicyclo[2.2.2]octane bromide and the following chemical structure:

Umeclidinium bromide is a white powder with a molecular weight of 508.5, and the empirical formula is C29H34NO2•Br (as a quaternary ammonium bromide compound). It is slightly soluble in water.

Vilanterol trifenatate is a white powder with a molecular weight of 774.8, and the empirical formula is C24H33Cl2NO5•C20H16O2. It is practically insoluble in water.

TRELEGY ELLIPTA is a light grey and beige plastic inhaler containing 2 foil blister strips. Each blister on one strip contains a white powder blend of micronized fluticasone furoate (100 or 200 mcg) and lactose monohydrate (12.4 or 12.3 mg) and each blister on the other strip contains a white powder blend of micronized umeclidinium bromide (74.2 mcg equivalent to 62.5 mcg of umeclidinium), micronized vilanterol trifenatate (40 mcg equivalent to 25 mcg of vilanterol), magnesium stearate (75 mcg), and lactose monohydrate (12.3 mg). The lactose monohydrate contains milk proteins. After the inhaler is activated, the powder within both blisters is exposed and ready for dispersion into the airstream created by the patient inhaling through the mouthpiece.

In adult subjects with severe asthma, mean peak inspiratory flow through the ELLIPTA inhaler was 96.6 L/min (range: 72.4 to 124.6 L/min).

The actual amount of drug delivered to the lung will depend on patient factors, such as inspiratory flow profile.

TRELEGY ELLIPTA contains fluticasone furoate, umeclidinium, and vilanterol. The mechanisms of action described below for the individual components apply to TRELEGY ELLIPTA. These drugs represent 3 different classes of medications (an ICS, an anticholinergic, and a LABA), each having different effects on clinical and physiological indices.

The precise mechanism through which fluticasone furoate affects COPD and asthma symptoms is not known. Inflammation is an important component in the pathogenesis of COPD and asthma. Corticosteroids have been shown to have a wide range of actions on multiple cell types (e.g., mast cells, eosinophils, neutrophils, macrophages, lymphocytes) and mediators (e.g., histamine, eicosanoids, leukotrienes, cytokines) involved in inflammation. Specific effects of fluticasone furoate demonstrated in in vitro and in vivo models included activation of the glucocorticoid response element, inhibition of pro-inflammatory transcription factors such as NFkB, and inhibition of antigen-induced lung eosinophilia in sensitized rats. These anti-inflammatory actions of corticosteroids may contribute to their efficacy.

Umeclidinium is a long-acting muscarinic antagonist, which is often referred to as an anticholinergic. It has similar affinity to the subtypes of muscarinic receptors M1 to M5. In the airways, it exhibits pharmacological effects through inhibition of M3 receptor at the smooth muscle leading to bronchodilation. The competitive and reversible nature of antagonism was shown with human and animal origin receptors and isolated organ preparations. In preclinical in vitro as well as in vivo studies, prevention of methacholine- and acetylcholine-induced bronchoconstrictive effects was dose-dependent and lasted longer than 24 hours. The clinical relevance of these findings is unknown. The bronchodilation following inhalation of umeclidinium is predominantly a site-specific effect.

Vilanterol is a LABA. In vitro tests have shown the functional selectivity of vilanterol was similar to salmeterol. The clinical relevance of this in vitro finding is unknown.

The pharmacologic effects of beta2-adrenergic agonist drugs, including vilanterol, are at least in part attributable to stimulation of intracellular adenyl cyclase, the enzyme that catalyzes the conversion of adenosine triphosphate (ATP) to cyclic-3ʹ,5ʹ-adenosine monophosphate (cyclic AMP). Increased cyclic AMP levels cause relaxation of bronchial smooth muscle and inhibition of release of mediators of immediate hypersensitivity from cells, especially from mast cells.

Who should not use Trelegy Ellipta?

Do not use Trelegy Ellipta if you:

What should I tell my healthcare provider before using Trelegy Ellipta?

Before using Trelegy Ellipta, tell your healthcare provider about all of your medical conditions, including if you:

Tell your healthcare provider about all the medicines you take, including prescription and over-the-counter medicines, vitamins, and herbal supplements. Trelegy Ellipta and certain other medicines may interact with each other. This may cause serious side effects.

Especially tell your healthcare provider if you take:

Know the medicines you take. Keep a list of them to show your healthcare provider and pharmacist when you get a new medicine.

How should I use Trelegy Ellipta?

Read the step-by-step instructions for use that come with Trelegy Ellipta.

What are the possible side effects of Trelegy Ellipta?

Trelegy Ellipta can cause serious side effects, including:

Common side effects of Trelegy Ellipta include:

These are not all the possible side effects of Trelegy Ellipta.

General information about the safe and effective use of Trelegy Ellipta

Medicines are sometimes prescribed for purposes other than those listed in a Patient Information leaflet. Do not use Trelegy Ellipta for a condition for which it was not prescribed. Do not give Trelegy Ellipta to other people, even if they have the same symptoms that you have. It may harm them.

You can ask your healthcare provider or pharmacist for information about Trelegy Ellipta that is written for health professionals.

How should I store Trelegy Ellipta?

Keep Trelegy Ellipta and all medicines out of the reach of children.

What are the ingredients in Trelegy Ellipta? 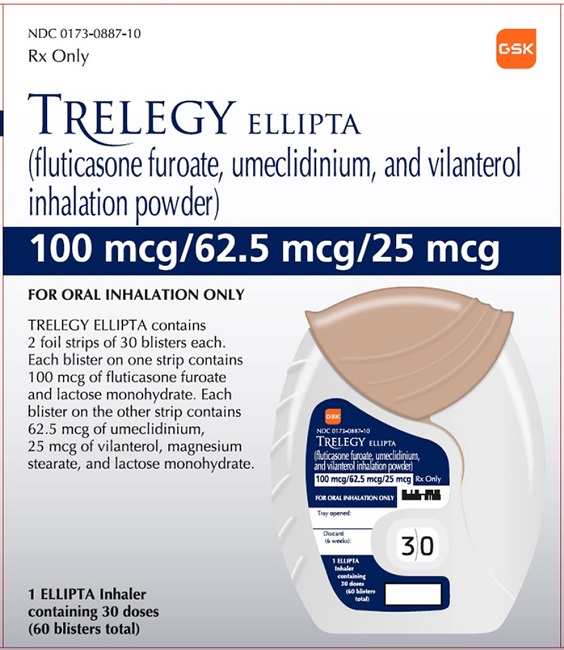 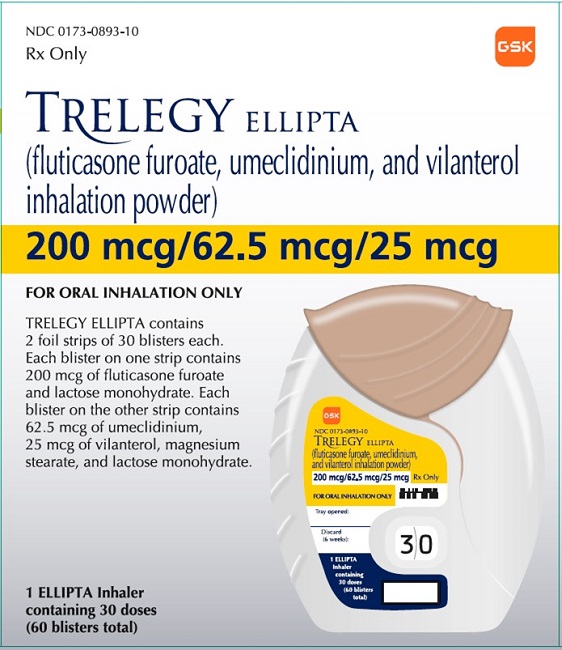