What is Stiolto Respimat?

Stiolto Respimat combines an anticholinergic, tiotropium bromide and a long-acting beta2-adrenergic agonist (LABA) medicine, olodaterol. Anticholinergic and LABA medicines such as Stiolto Respimat help the muscles around the airways in your lungs stay relaxed to prevent symptoms, such as wheezing, cough, chest tightness, and shortness of breath. These symptoms can happen when the muscles around the airways tighten. This makes it hard to breathe.

Stiolto Respimat is a prescription medicine used to control the symptoms of chronic obstructive pulmonary disease (COPD) in adults with COPD. COPD is a chronic lung disease that includes chronic bronchitis, emphysema, or both.

Stiolto Respimat is for long-term use and should be taken as 2 puffs 1 time each day, to improve the symptoms of COPD for better breathing.

STIOLTO RESPIMAT is a combination of tiotropium, an anticholinergic, and olodaterol, a long-acting beta2-adrenergic agonist (LABA).

The drug substance tiotropium bromide monohydrate is chemically described as (1α, 2ß, 4ß, 5α, 7ß)-7-[(Hydroxydi-2-thienylacetyl)oxy]-9,9-dimethyl-3-oxa-9-azoniatricyclo[3.3.1.02,4] nonane bromide monohydrate. It is a synthetic, non-chiral, quaternary ammonium compound. Tiotropium bromide is a white or yellowish white powder. It is sparingly soluble in water and soluble in methanol.

The structural formula is: 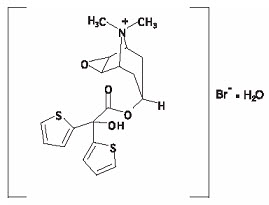 Tiotropium bromide (monohydrate) has a molecular mass of 490.4 and a molecular formula of C19H22NO4S2Br ∙ H2O.

The drug substance olodaterol hydrochloride is chemically described as 2H-1,4-Benzoxazin-3H(4H)-one, 6-hydroxy-8-[(1R)-1-hydroxy-2-[[2-(4-methoxyphenyl)-1,1-dimethylethyl]-amino]ethyl]-, monohydrochloride. Olodaterol hydrochloride is a white to off-white powder that is sparingly-slightly soluble in water and slightly soluble in ethanol. The molecular weight is 422.9 g/mole (salt): 386.5 g/mole (base), and the molecular formula is C21H26N2O5 × HCl as a hydrochloride. The conversion factor from salt to free base is 1.094.

The structural formula is:

The drug product, STIOLTO RESPIMAT, is composed of a sterile aqueous solution of tiotropium bromide and olodaterol hydrochloride filled into a 4.5 mL plastic container crimped into an aluminum cylinder (STIOLTO RESPIMAT cartridge) for use with the STIOLTO RESPIMAT inhaler.

When used with the STIOLTO RESPIMAT inhaler each cartridge, containing 4 grams of sterile aqueous solution, delivers the labeled number of metered actuations after preparation for use. Each dose (one dose equals two actuations) from the STIOLTO RESPIMAT inhaler delivers 5 mcg tiotropium and 5 mcg olodaterol in 22.1 mcL from the mouthpiece. As with all inhaled drugs, the actual amount of drug delivered to the lung may depend on patient factors, such as the coordination between the actuation of the inhaler and inspiration through the delivery system. The duration of inspiration should be at least as long as the spray duration (1.5 seconds).

STIOLTO RESPIMAT contains both tiotropium and olodaterol. The properties described below for the individual components apply to STIOLTO RESPIMAT. These drugs represent 2 different classes of medication (an anticholinergic and a beta-agonist) that have different effects on clinical and physiological indices.

Tiotropium is a long-acting, muscarinic antagonist which is often referred to as an anticholinergic. It has similar affinity to the subtypes of muscarinic receptors, M1 to M5. In the airways, it exhibits pharmacological effects through inhibition of M3-receptors at the smooth muscle leading to bronchodilation. The competitive and reversible nature of antagonism was shown with human and animal origin receptors and isolated organ preparations. In preclinical in vitro as well as in vivo studies, prevention of methacholine-induced bronchoconstriction effects was dose-dependent and lasted longer than 24 hours. The bronchodilation following inhalation of tiotropium is predominantly a site-specific effect.

Olodaterol is a long-acting beta2-adrenergic agonist (LABA). The compound exerts its pharmacological effects by binding and activation of beta2-adrenoceptors after topical administration by inhalation. Activation of these receptors in the airways results in a stimulation of intracellular adenyl cyclase, an enzyme that mediates the synthesis of cyclic-3′, 5′ adenosine monophosphate (cAMP). Elevated levels of cAMP induce bronchodilation by relaxation of airway smooth muscle cells. In vitro studies have shown that olodaterol has 241-fold greater agonist activity at beta2-adrenoceptors compared to beta1-adrenoceptors and 2299-fold greater agonist activity compared to beta3-adrenoceptors. The clinical significance of these findings is unknown.

Who should not use Stiolto Respimat?

Do not use Stiolto Respimat if you:

What should I tell my healthcare provider before using Stiolto Respimat?

Before you use Stiolto Respimat, tell your healthcare provider about all of your medical conditions, including if you:

Know the medicines you take. Keep a list of your medicines with you to show your healthcare provider and pharmacist each time you get a new medicine.

How should I use Stiolto Respimat?

Read the step-by-step instructions that come with Stiolto Respimat.

What are the possible side effects of Stiolto Respimat?

Stiolto Respimat can cause serious side effects, including:

General information about the safe and effective use of Stiolto Respimat

Medicines are sometimes prescribed for purposes other than those listed in a Patient Information leaflet. Do not use Stiolto Respimat for a condition for which it was not prescribed. Do not give Stiolto Respimat to other people, even if they have the same symptoms that you have. It may harm them.
You can ask your healthcare provider or pharmacist for information about Stiolto Respimat that is written for health professionals.

How should I store Stiolto Respimat?

What are the ingredients in Stiolto Respimat? 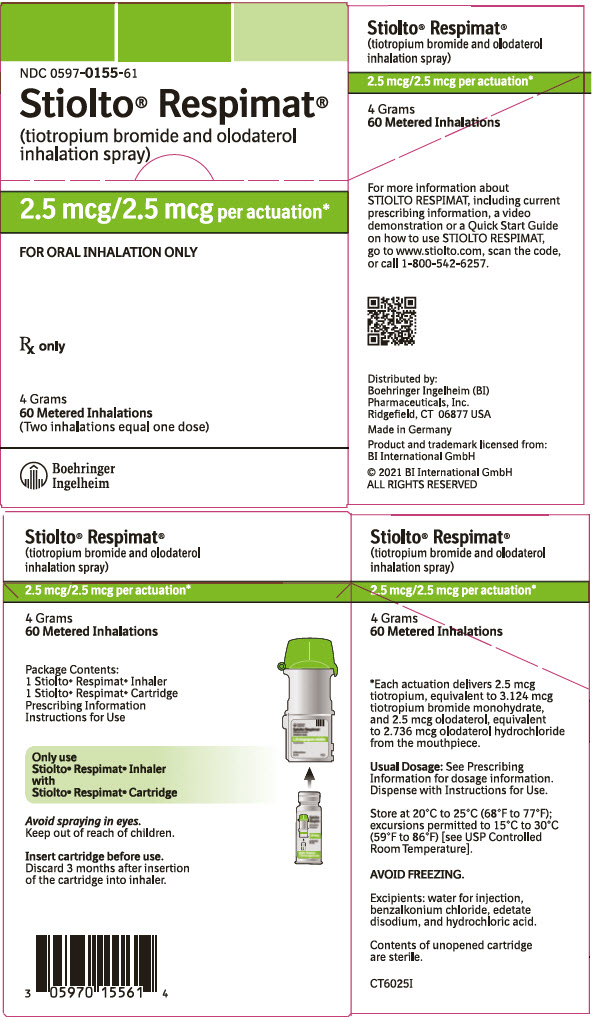