Soliqua is an injectable prescription medicine that contains 2 diabetes medicines, insulin glargine and lixisenatide, which may improve blood sugar (glucose) control in adults with type 2 diabetes when used with diet and exercise.

SOLIQUA  is a combination of a long-acting basal insulin analog, insulin glargine, and a GLP-1 receptor agonist, lixisenatide.

Lixisenatide is a synthetic analogue of human GLP-1, which acts as a GLP-1 receptor agonist. Lixisenatide is a protein containing 44 amino acids, which is amidated at the C-terminal amino acid (position 44) and has a molecular weight of 4.8585 kDa.

SOLIQUA 100/33 (insulin glargine and lixisenatide) injection is a sterile, colorless to almost colorless solution for subcutaneous use. SOLIQUA 100/33 is supplied as a prefilled single-patient-use disposable pen contain 300 units of insulin glargine and 100 mcg of lixisenatide in 3 mL of a clear, colorless to almost colorless, sterile, and aqueous solution. Each mL contains 100 units of insulin glargine and 33 mcg of lixisenatide and the inactive ingredients: glycerol (20 mg), metacresol (2.7 mg), methionine (3 mg), zinc (30 mcg), and Water for Injection, USP. Hydrochloric acid and/or sodium hydroxide may be added to adjust the pH. The approximate pH is 4.5.

SOLIQUA 100/33 is a combination of insulin glargine, a basal insulin analog, and lixisenatide, a GLP-1 receptor agonist.

The primary activity of insulin, including insulin glargine, is regulation of glucose metabolism. Insulin and its analogs lower blood glucose by stimulating peripheral glucose uptake, especially by skeletal muscle and fat, and by inhibiting hepatic glucose production. Insulin inhibits lipolysis and proteolysis and enhances protein synthesis.

What is the most important information I should know about Soliqua 100/33?

Before using Soliqua 100/33, tell your healthcare provider if you have had:

These medical problems may make you more likely to get pancreatitis.
Stop taking Soliqua 100/33 and call your healthcare provider right away if you have pain in your stomach area (abdomen) that is severe and will not go away. The pain may be felt going from your abdomen through to your back. The pain may happen with or without vomiting. These may be symptoms of pancreatitis.

What should I tell my healthcare provider before using Soliqua 100/33?

Before using Soliqua 100/33, tell your healthcare provider about all your medical conditions including if you:

Your dose of Soliqua 100/33 may need to change because of a change in level of physical activity or exercise, weight gain or loss, increased stress, illness, change in diet, or because of other medicines you take.

What are the possible side effects of Soliqua 100/33?

Soliqua 100/33 may cause serious side effects including:

Talk with your healthcare provider about how to treat low blood sugar.

The most common side effects of Soliqua 100/33 include:

Medicines are sometimes prescribed for purposes other than those listed in a Medication Guide. Do not use Soliqua 100/33 for a condition for which it was not prescribed. Do not give Soliqua 100/33 to other people, even if they have the same symptoms that you have. It may harm them.
You can ask your pharmacist or healthcare provider for information about Soliqua 100/33 that is written for health professionals. 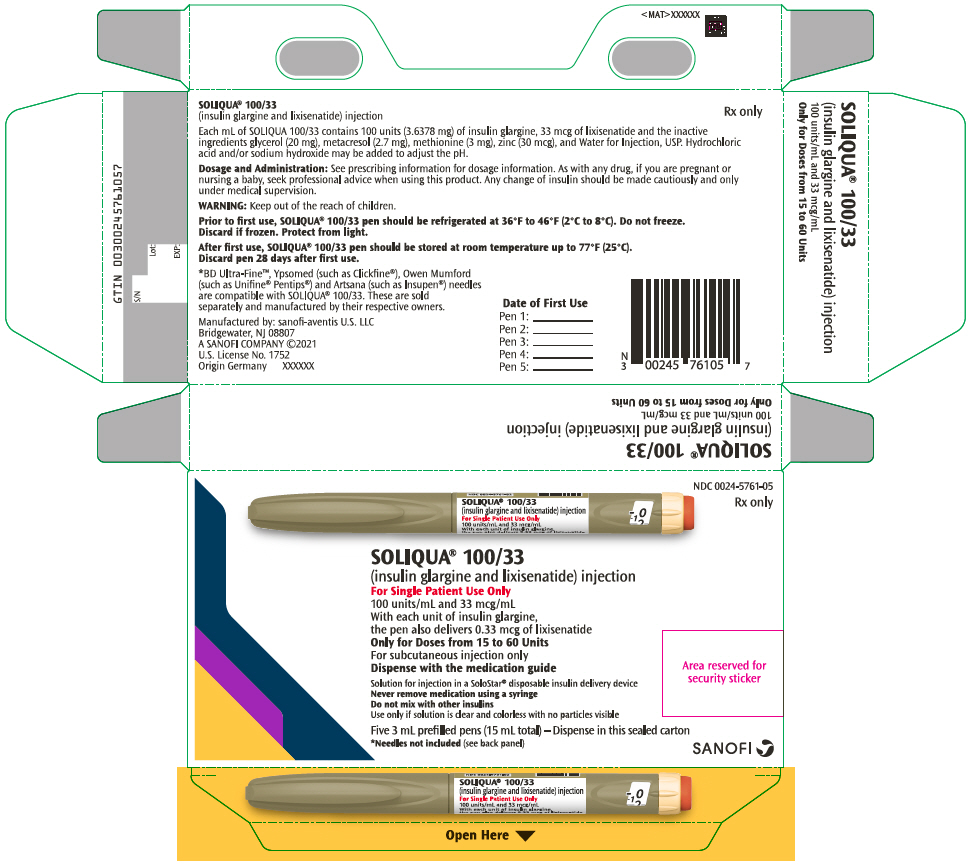