What is Simponi Aria?

Golimumab is a human IgG1қ monoclonal antibody specific for human tumor necrosis factor alpha (TNFα) that exhibits multiple glycoforms with molecular masses of approximately 150 to 151 kilodaltons. Golimumab was created using genetically engineered mice immunized with human TNF, resulting in an antibody with human-derived antibody variable and constant regions. Golimumab is produced by a recombinant cell line cultured by continuous perfusion and is purified by a series of steps that includes measures to inactivate and remove viruses.

The SIMPONI ARIA® (golimumab) Injection is a sterile solution of the golimumab antibody supplied in a 4-mL glass vial for intravenous infusion.

Golimumab is a human monoclonal antibody that binds to both the soluble and transmembrane bioactive forms of human TNFα. This interaction prevents the binding of TNFα to its receptors, thereby inhibiting the biological activity of TNFα (a cytokine protein). There was no evidence of the golimumab antibody binding to other TNF superfamily ligands; in particular, the golimumab antibody did not bind or neutralize human lymphotoxin. Golimumab did not lyse human monocytes expressing transmembrane TNF in the presence of complement or effector cells.

Elevated TNFα levels in the blood, synovium, and joints have been implicated in the pathophysiology of several chronic inflammatory diseases such as rheumatoid arthritis, psoriatic arthritis and ankylosing spondylitis. TNFα is an important mediator of the articular inflammation that is characteristic of these diseases. Golimumab modulated the in vitro biological effects mediated by TNF in several bioassays, including the expression of adhesion proteins responsible for leukocyte infiltration (E-selectin, ICAM-1 and VCAM-1) and the secretion of proinflammatory cytokines (IL-6, IL-8, G-CSF and GM-CSF). The clinical relevance of these findings is unknown.

What is the most important information I should know about Simponi Aria?

You should not start receiving Simponi Aria if you have any kind of infection unless your doctor tells you to.

Before receiving Simponi Aria, tell your doctor if you:

After receiving Simponi Aria, call your doctor right away if you have any symptoms of an infection. Simponi Aria can make you more likely to get infections or make worse any infection that you have.

What should I tell my healthcare provider before using Simponi Aria?

See “What is the most important information I should know about Simponi Aria?”.

Before starting Simponi Aria, tell your doctor about all your medical conditions, including if you:

Tell your doctor about all the medicines you take, including prescription and over-the-counter medicines, vitamins, and herbal supplements.

Especially, tell your doctor if you:

Ask your doctor or pharmacist for a list of these medicines if you are not sure.

Keep a list of all your medicines with you to show your doctor and pharmacist each time you get a new medicine.

How should I use Simponi Aria?

What are the possible side effects of Simponi Aria?

Simponi Aria can cause serious side effects, including:

See “What is the most important information I should know about Simponi Aria?”

Hepatitis B infection in people who carry the virus in their blood. If you are a carrier of the hepatitis B virus (a virus that affects the liver), the virus can become active while you use Simponi Aria. Your doctor should do blood tests before you start treatment with Simponi Aria and while you are receiving Simponi Aria.

Nervous System Problems. Rarely, people receiving TNF-blocker medicines, including Simponi Aria, have nervous system problems such as multiple sclerosis or Guillain-Barré syndrome. Tell your doctor right away if you get any of these symptoms:

Immune System Problems. Rarely, people receiving TNF-blocker medicines have developed symptoms that are like the symptoms of lupus. Tell your doctor if you have any of these symptoms:

Liver Problems. Liver problems can happen in people who receive TNF-blocker medicines, including Simponi Aria. These problems can lead to liver failure and death. Call your doctor right away if you have any of these symptoms:

Blood Problems. Low blood counts have been seen with Simponi Aria. Your body may not make enough blood cells that help fight infections or help stop bleeding. Symptoms include fever, bruising or bleeding easily, or looking pale. Your doctor will check your blood counts before and during treatment with Simponi Aria.

The most common side effects of Simponi Aria include:

These are not all of the possible side effects of Simponi Aria.

General information about the safe and effective use of Simponi Aria

Medicines are sometimes prescribed for purposes other than those listed in a Medication Guide.
You can ask your doctor or pharmacist for information about Simponi Aria that is written for health professionals.

What are the ingredients in Simponi Aria? 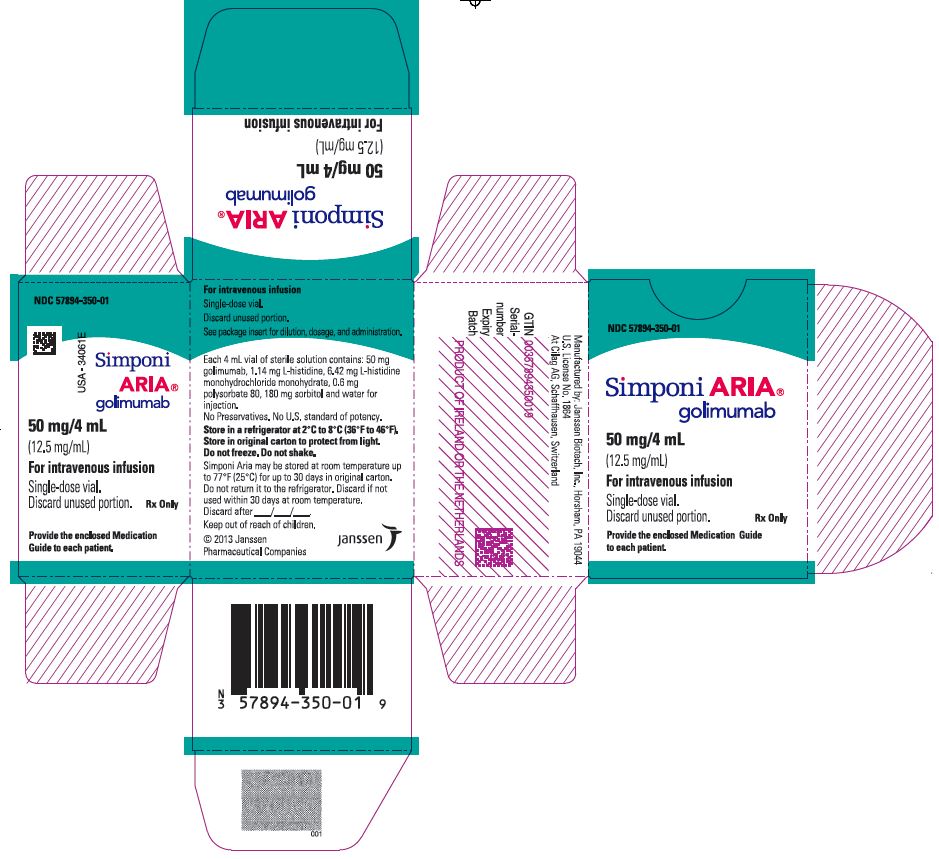