Tarpeyo is a prescription medicine used to reduce levels of protein in the urine (proteinuria) in adults with a kidney disease called primary immunoglobulin A nephropathy (IgAN), who are at high risk of disease progression.

It is not known if this medicine is safe and effective in children.

This indication is approved under accelerated approval based on a reduction in proteinuria. It has not been established whether TARPEYO slows kidney function decline in patients with IgAN. Continued approval for this indication may be contingent upon verification and description of clinical benefit in a confirmatory clinical trial.

The recommended duration of therapy is 9 months, with a dosage of 16 mg administered orally once daily [see Clinical Studies (14.1)]. When discontinuing therapy, reduce the dosage to 8 mg once daily for the last 2 weeks of therapy [see Warnings and Precautions (5.1)].

The delayed release capsules should be swallowed whole in the morning, at least 1 hour before a meal. Do not open, crush or chew.

If a dose is missed, take the prescribed dose at the next scheduled time. Do not double the next dose.

Safety and efficacy of treatment with subsequent courses of TARPEYO have not been established.

4 CONTRAINDICATIONS (WHAT IS THIS?)

When corticosteroids are used chronically, systemic effects such as hypercorticism and adrenal suppression may occur. Corticosteroids can reduce the response of the hypothalamus-pituitary-adrenal (HPA) axis to stress. In situations where patients are subject to surgery or other stress situations, supplementation with a systemic corticosteroid is recommended. When discontinuing therapy [see Dosing and Administration (2)] or switching between corticosteroids, monitor for signs of adrenal axis suppression.¶

Patients who are on drugs that suppress the immune system are more susceptible to infection than healthy individuals. Chickenpox and measles, for example, can have a more serious or even fatal course in susceptible patients or patients on immunosuppressant doses of corticosteroids. Avoid corticosteroid therapy in patients with active or quiescent tuberculosis infection, untreated fungal, bacterial, systemic viral or parasitic infections, or ocular herpes simplex. Avoid exposure to active, easily-transmitted infections (e.g., chicken pox, measles). Corticosteroid therapy may decrease the immune response to some vaccines.

How the dose, route, and duration of corticosteroid administration affect the risk of developing a disseminated infection is not known. The contribution of the underlying disease and/or prior corticosteroid treatment to the risk is also not known. If exposed to chickenpox, consider therapy with varicella zoster immune globulin (VZIG) or pooled intravenous immunoglobulin (IVIG). If exposed to measles, consider prophylaxis with pooled intramuscular immunoglobulin (IG). If chickenpox develops, consider treatment with antiviral agents.

TARPEYO is a systemically available corticosteroid and is expected to cause related adverse reactions. Monitor patients with hypertension, prediabetes, diabetes mellitus, osteoporosis, peptic ulcer, glaucoma or cataracts, or with a family history of diabetes or glaucoma, or with any other condition where corticosteroids may have unwanted effects.

The following clinically significant adverse reactions are described elsewhere in the labeling:

The safety of TARPEYO has been evaluated in a randomized controlled study in 197 patients.

The most common adverse reactions reported in greater than or equal to 5% of TARPEYO-treated patients are listed in TABLE 1.

The majority of adverse reactions were mild or moderate in severity.

Most adverse reactions that occurred at a greater incidence for TARPEYO compared to placebo were consistent with hypercortisolism.

8 USE IN SPECIFIC POPULATIONS

The safety and efficacy of TARPEYO in pediatric patients have not been established.

Clinical studies of TARPEYO did not include sufficient numbers of subjects aged 65 and over to determine whether they respond differently from younger subjects. Other reported clinical experience has not identified differences in responses between the elderly and younger patients. In general, dose selection for an elderly patient should be cautious, reflecting the greater frequency of decreased hepatic, renal, or cardiac function, and of concomitant disease or other drug therapy.

Reports of acute toxicity and/or death following overdosage of corticoids are rare.

In the event of acute overdosage, no specific antidote is available. Treatment consists of supportive and symptomatic therapy.

Budesonide is provided as a mixture of two epimers (22R and 22S). The empirical formula of budesonide is C25H34O6 and its molecular weight is 430.5. Its structural formula is: 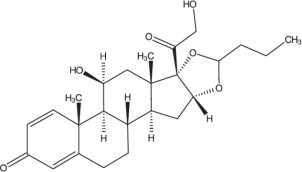 Budesonide is a white to off-white, tasteless, odorless powder that is practically insoluble in water, sparingly soluble in alcohol, and freely soluble in chloroform.

Budesonide is a corticosteroid with potent glucocorticoid activity and weak mineralocorticoid activity that undergoes substantial first pass metabolism. Mucosal B-cells present in the ileum, including the Peyer’s patches, express glucocorticoid receptors and are responsible for the production of galactose-deficient IgA1 antibodies (Gd-Ag1) causing IgA nephropathy. Through their anti-inflammatory and immunosuppressive effects at the glucocorticoid receptor, corticosteroids can modulate B-cell numbers and activity. It has not been established to what extent TARPEYO’s efficacy is mediated via local effects in the ileum vs systemic effects.

Treatment with corticosteroids, including TARPEYO, is associated with a suppression of endogenous cortisol concentrations and an impairment of the hypothalamus-pituitary-adrenal (HPA) axis function.

The effect of age, race, and body weight on the pharmacokinetics of TARPEYO has not been established.

Patients with severe hepatic impairment (Child-Pugh Class C) have not been studied.

Effects of Other Drugs on Budesonide

In an open, non-randomized, cross-over study, 6 healthy subjects were given budesonide 10 mg as a single dose, either alone or concomitantly with the last ketoconazole dose of 3 days treatment with ketoconazole 100 mg twice daily. Co-administration of ketoconazole resulted in 8-fold the AUC of budesonide, compared to budesonide alone.

In an open, randomized, cross-over study 8 healthy subjects were given Entocort EC 3 mg as a single dose, either alone or concomitantly with the last ketoconazole dose of 4 days treatment with ketoconazole 200 mg once daily. Co-administration of ketoconazole resulted in 6.5-fold the AUC of budesonide, compared to budesonide alone.

In an open, randomized, cross-over study, 8 healthy subjects were given Entocort EC 3 mg, either alone, or concomitantly with 600 mL concentrated grapefruit juice (which inhibits CYP3A4 activity predominantly in the intestinal mucosa), on the last of 4 daily administrations. Concomitant administration of grapefruit juice resulted in doubling the bioavailability of budesonide compared to budesonide alone.

The pharmacokinetics of TARPEYO have not been evaluated in combination with proton pump inhibitors (PPIs). Since the disintegration of TARPEYO is pH dependent, the release properties and uptake of budesonide may be altered when TARPEYO is taken after treatment with PPIs. In a study assessing intragastric and intraduodenal pH in healthy volunteers after repeated dosing with the PPI omeprazole 40 mg once daily, intragastric and intraduodenal pH did not exceed that required for disintegration of TARPEYO. Beyond the duodenum, PPIs such as omeprazole are unlikely to affect pH.

In a parallel study, the pharmacokinetics of budesonide were not significantly different between healthy female subjects who received oral contraceptives containing desogestrel 0.15 mg and ethinyl estradiol 30 μg and healthy female subjects who did not receive oral contraceptives. Budesonide 4.5 mg once daily for one week did not affect the plasma concentrations of ethinyl estradiol, a CYP3A4 substrate. The effect of budesonide 16 mg once daily on the plasma concentrations of desogestrel and ethinyl estradiol was not studied.

The effect of TARPEYO on proteinuria was assessed in a randomized, double-blind, multicenter study (Nef-301, NCT: 03643965) in patients with biopsy-proven IgAN, eGFR ≥35 mL/min/1.73 m2, and proteinuria (defined as either ≥1 g/day or UPCR ≥0.8 g/g) who were on a stable dose of maximally-tolerated RAS inhibitor therapy. Patients with other glomerulopathies, nephrotic syndrome, or those who had been treated with systemic immunosuppressive medications were excluded. Patients were randomized 1:1 to either TARPEYO 16 mg once daily or placebo and treated for nine months followed by a 2-week taper of either TARPEYO 8 mg once daily or placebo.

The primary endpoint was the percentage reduction in UPCR at 9 months compared to baseline.  The results are shown in TABLE 2.

The treatment effect for the UPCR endpoint at 9 months were consistent across key subgroups, including key demographic (such as age, sex, race) and baseline disease (such as baseline proteinuria) characteristics.

16 HOW SUPPLIED/STORAGE AND HANDLING

TARPEYO (budesonide) delayed release capsules 4 mg, are white opaque- coated capsules marked with “CAL10 4 MG” in black ink on the body of the capsule. They are supplied as follows:

Advise patients that TARPEYO may cause hypercorticism and adrenal axis suppression and to follow a taper schedule, as instructed by their healthcare provider if discontinuing therapy [see Warnings and Precautions (5.1)].

TARPEYO causes immunosuppression. Advise patients to avoid exposure to people with chicken pox or measles and, if exposed, to consult their healthcare provider immediately. There is an increased risk of developing a variety of infections, including worsening of existing tuberculosis, fungal, bacterial, viral or parasitic infections, or ocular herpes simplex, and to contact their healthcare provider if they develop any symptoms of infection [see Warnings and Precautions (5.3)]. Provide advice regarding vaccination schedules for immunocompromised patients.

Advise patients that TARPEYO delayed release capsules should be swallowed whole and not chewed, crushed or broken and to take TARPEYO in the morning, at least 1 hour before a meal [See Dosage and Administration (2)].

Advise patients to avoid the consumption of grapefruit juice for the duration of their TARPEYO therapy [See Drug Interactions (7.1)].