Skyla is a small, flexible plastic T-shaped system that slowly releases a progestin hormone called levonorgestrel (LNG) that is often used in birth control pills. Because Skyla releases LNG into your uterus, only small amounts of the hormone enter your blood. Skyla does not contain estrogen.

Two thin threads are attached to the stem (lower end) of Skyla. The threads are the only part of Skyla you can feel when Skyla is in your uterus; however, unlike a tampon string, the threads do not extend outside your body.

What if I need birth control for more than 3 years?

Skyla must be removed after 3 years. Your healthcare provider can place a new Skyla during the same office visit if you choose to continue using Skyla.

What if I want to stop using Skyla?

Skyla is intended for use up to 3 years but you can stop using Skyla at any time by asking your healthcare provider to remove it. You could become pregnant as soon as Skyla is removed, so you should use another method of birth control if you do not want to become pregnant. Talk to your healthcare provider about the best birth control methods for you, because your new method may need to be started 7 days before Skyla is removed to prevent pregnancy.

What if I change my mind about birth control and want to become pregnant in less than 3 years?

How does Skyla work?

Skyla may work in several ways including thickening cervical mucus, inhibiting sperm movement, reducing sperm survival, and thinning the lining of your uterus. It is not known exactly how these actions work together to prevent pregnancy.

How well does Skyla work for contraception?

Skyla (levonorgestrel-releasing intrauterine system) contains 13.5 mg of LNG, a progestin, and is intended to provide an initial release rate of approximately14 mcg/day of LNG after 24 days.

Skyla consists of a T-shaped polyethylene frame (T-body) with a steroid reservoir (hormone elastomer core) around the vertical stem. The white T-body has a loop at one end of the vertical stem and two horizontal arms at the other end. The reservoir consists of a whitish or pale yellow cylinder, made of a mixture of LNG and silicone (polydimethylsiloxane), containing a total of 13.5 mg LNG. The reservoir is covered by a semi-opaque silicone membrane, composed of polydimethylsiloxane and colloidal silica. A ring composed of 99.95% pure silver is located at the top of the vertical stem close to the horizontal arms and is visible by ultrasound. The polyethylene of the T-body is compounded with barium sulfate, which makes it radiopaque. A monofilament brown polyethylene removal thread is attached to a loop at the end of the vertical stem of the T-body. The polyethylene of the removal thread contains iron oxide as a colorant (see Figure 10).

The components of Skyla, including its packaging, are not manufactured using natural rubber latex. 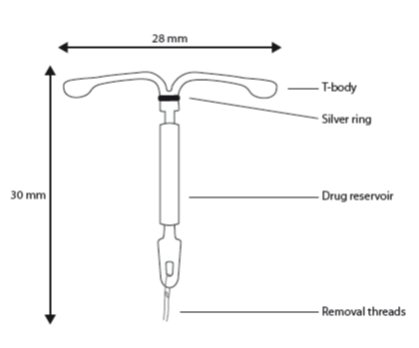 The local mechanism by which continuously released LNG contributes to the contraceptive effectiveness of Skyla has not been conclusively demonstrated. Studies of Skyla and similar LNG IUS prototypes have suggested several mechanisms that prevent pregnancy: thickening of cervical mucus preventing passage of sperm into the uterus, inhibition of sperm capacitation or survival, and alteration of the endometrium.

What is the most important information I should know about Skyla?

Skyla does not protect against HIV infection (AIDS) and other sexually transmitted infections (STIs).

Who should not take Skyla?

Do not use Skyla if you:

What should I tell my healthcare provider before taking Skyla?

Before having Skyla placed, tell your healthcare provider if you:

How should I use Skyla?

Skyla is placed by your healthcare provider during an in-office visit.

You may experience pain, bleeding or dizziness during and after placement. If your symptoms do not pass within 30 minutes after placement, Skyla may not have been placed correctly. Your healthcare provider will examine you to see if Skyla needs to be removed or replaced.

What are the possible side effects of Skyla?

Skyla can cause serious side effects, including:

Tell your healthcare provider right away if you have any of these signs of PID: long-lasting or heavy bleeding, unusual vaginal discharge, low abdominal (stomach area) pain, painful sex, chills, or fever.

Common side effects of Skyla include:

Call your healthcare provider for medical advice about side effects. You may report side effects to FDA at 1-800-FDA-1088.

After Skyla has been placed, when should I call my healthcare provider?

If Skyla is accidentally removed and you had vaginal intercourse within the preceding week, you may be at risk of pregnancy, and you should talk to a healthcare provider.

Call your healthcare provider if you have any concerns about Skyla. Be sure to call if you:

General information about the safe and effective use of Skyla

How should I store Skyla?

What are the ingredients in Skyla? 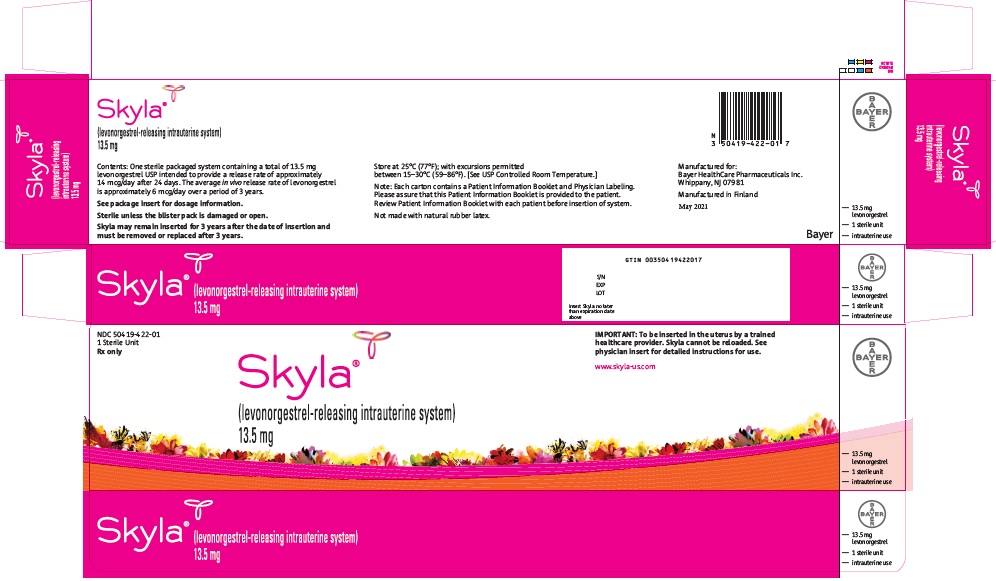